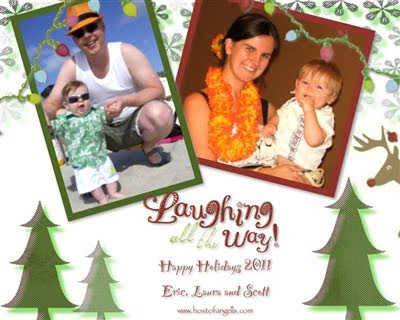 First and foremost: Merry Christmas, Happy Holidays and all that good jazz. We are so happy to have you in our lives and we look forward to many more years of family connection, friendship and goodwill!

What did we do this year? Let's break it down by person.

Scott (admit it, you're most interested in our newest member!)Scott started the year off at just 10 weeks old. By that point, he had already been through several of our infamous parties, gone with mommy to Disneyland and had been featured in his first holiday card. But 2011 brought so many amazing changes that it's worth a recap. In the last year Scott has grown approximately 14 inches (and is now 33 inches tall), gained 16 lbs (28 lbs total), sprouted 10 teeth (although it will be 12 by the end of the year), and learned to crawl, walk, dance, throw a ball, and much more. He's gone from a diet of exclusively breastmilk to eating pretty much everything aside from hard choking hazards like nuts. His favorite food is still blueberries and he can't wait until they're back in season. He's got a few words, although his understanding is much better than his speech. He survived a week of mom and dad out of town with flying colors. And possibly most exciting of all, he's looking forward to being a big brother in a few mounths. Or at least, he would be looking forward to it if he understood what it meant. He gets along well with other children at daycare, both older and younger, and he should make a great big brother. Which brings us to:

Laura
I started off 2011 with quite a bit of extra baby weight and on maternity leave. I went back to work 3 days a week at the start of January and sent my baby off to daycare! Work is much less interesting this year because my two best friends at work moved away while I was on maternity leave and I'm now the only female scientist in the San Diego office. I'm still at Trex Enterprises, and I hit my 5 year mark in June. Through a fun twist with one of the other companies in my building, I got my favorite perk of the year: free lunchtime workout classes. I discovered that I really like to work out, and managed to lose all of my baby weight plus an additional 5 lbs and3 clothing sizes! I did all of this just in time to find out on June 29th that I'm pregnant again! Being pregnant with a little one has been challenging, but I feel like I'm in much better physical shape this time, and I'm also more mentally prepared for this journey. I am due to have another little boy on March 5th! I'm now officially in my 3rd trimester and I can't believe how soon I'll have two kids.

The big event of the year was a trip to Scotland for the wedding of Hope (my other soul mate) and Colin! It happened right around the time Scott was a year old and we were able to leave him home with Eric's parents (Thank you!). It was great to get some extended grownup time, to visit Hope and Heather (I had 2 friends move to Scotland in 12 months...pfft), and even just to travel again. It was the perfect baby moon. And thanks to all my working out, I wasn't the obviously "pregnant bridesmaid" as I had worried, even at 20 weeks pregnant.

Eric
Besides the Scotland trip, which I enjoyed as much as Laura, my other big milestone this year was turning 30. However, my own roaring 20s came to an earlier end, and I already have a (wonderful) wife, kid(s), and a house, so I don't really feel any difference. My big birthday weekend was mostly family time spent eating Thanksgiving dinner and putting up Christmas decorations. I've now entered my second year at OnRamp Wireless, which remains as fun and interesting as I'd initially hoped.

Overall the branch of the Angell family is doing well, preparing ourselves and our home for a second baby and trying to enjoy each other as much as we can. 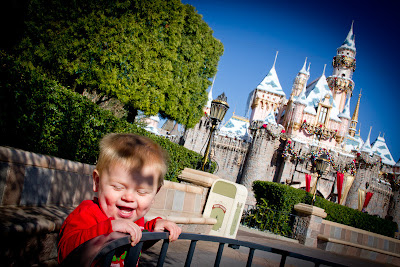